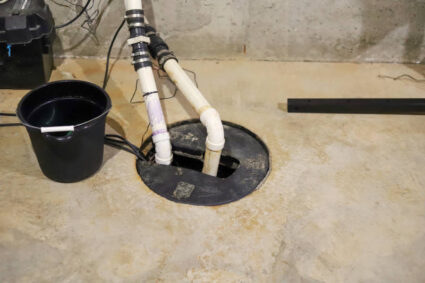 Summer 2021 has had its share of rain here in the Aurora, Oswego, Plainfield, Naperville and Lisle area. Ideally, your sump pump has been working as it should to keep all of that water outside where it belongs.

Your sump pump keeps your basement dry by collecting excess water and directing it away from the house. A properly working pump is important all year long, but we often don’t know if it is failing until a big problem makes us notice. With that in mind, let’s be proactive by discussing early signs of when it might be time to replace your sump pump.

Time to Replace the Sump Pump? Not Turning On

Your sump pump will work the hardest during a heavy rainstorm. However, it also springs into action when water seeps into your basement from melting snow, dripping pipes or pressure from the ground.

The sump pump’s main job is to remove the water that gathers around your basement. Puddles or pooling on the floor often indicate a faltering sump pump. If you start seeing this water, let your plumbing professional know right away to prevent further flooding and damage.

If you recognize that your sump pump is turning off and on a lot, it can be a sign that the basin is too small (e.g. 5 gallons) for the volume of water in the basement. If this is the case, it can overwork the sump pump’s motor and cause it to fail.

A deeper basin will help ensure that the sump pump activates only when it has to. Your plumbing professional can install a basin that holds up to 30 gallons, which can often be much better for performance than 5-gallon basins are.

While you can typically hear a sump pump doing its job, it should not be overly noisy. Strange sounds such as gurgling, clanging or rattling could mean there’s an issue with a jammed impeller or other worn or damaged parts. If you start noticing these noises, let your plumbing professional know soon.

A sump pump that always runs in spite of water levels or weather conditions is calling out for attention. Of particular concern, if it continues to run after all water has been emptied from the basin, it will quickly overheat because the water helps to cool it as it works.

One major cause of a constantly running sump pump is incorrect size. A pump that is too small for the basin will strain to redirect the volume of water being given to it. An oversized pump will also work extra hard because water will fill the basin faster.

Another possible cause of an always running sump pump is a float switch that is stuck in the “on” position. The float switch is the lightweight device that floats up as water in the basin rises. When the switch reaches a particular height, it activates the pump. When the level goes back down, the switch turns the pump off.

Sometimes, debris, pipes or wires can jam or snag the switch and keep it in the “on” position, making it continue to run. In other instances, an improperly installed pump can shift in the basin and the switch will press against a wall of the pit, forcing the pump to run.

This factor is probably obvious, but it’s one we can all overlook. A sump pump’s age can easily slip from our awareness. We also might not be consistent in having the pump inspected for maintenance. The years pass, and before we know it, the pump reaches the end of its lifespan, perhaps even at the most inopportune time such as during a storm.

On the average, sump pumps should be replaced every 7 to 10 years. If you don’t know your pump’s age, consider scheduling an inspection soon. At minimum, your plumber can clean the pump and update you on its condition. The best time for an inspection in Aurora, Oswego, Plainfield, Naperville or Lisle is usually in the early fall or late winter.

Here for Answers and Service

Beery Heating and Cooling specializes in sump pump service and installation for Naperville, Aurora, Plainfield, Oswego and Lisle. If you have any questions about when to replace your sump pump, we would be glad to discuss them with you and provide the answers you need. Just give us a call at (630) 585-6444!

We are available for sump pump replacement throughout the area, including Montgomery, Yorkville, Plano, Batavia, Sugar Grove and North Aurora.