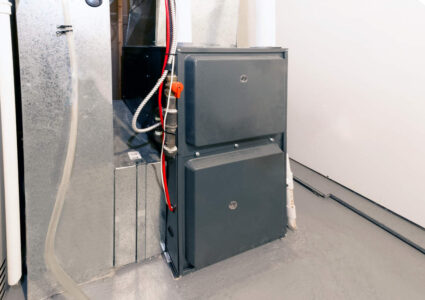 As winter moves in and settles over Aurora, Oswego, Plainfield, Naperville and Lisle for the next few months, our thoughts will turn to staying warm until we see that welcome first sign of spring again.

Many conversations about heating during the season will focus on furnace repair, replacement and maintenance, so we thought today we’d touch on something even more specific: the igniter in your furnace.

What Is the Furnace Igniter?

In the past, many furnaces used a pilot light to heat the air blowing into the home. Depending on your age, you might even remember a time when Mom or Dad had to bravely light the pilot light themselves to get the furnace going. Today’s furnaces include an igniter that does the job for us.

A modern gas furnace burns a mix of air and natural gas. When this mixture approaches the burners, the hot surface igniter – also referred to as a glow plug – heats up until it reaches about 1200°F. This sparks the combustion that heats the air moving into your home.

The furnace igniter is controlled by the thermostat. You’ve likely heard the audible “click” from your furnace when it responds to the thermostat setting. That is the sound of the igniter igniting the gas. There are also other types of igniters that create combustion by heating up and touching the surface of the gas rather than by generating a spark.

The hot surface igniter is vital – your furnace will not produce and blow hot air without it. Because it intensively heats and then cools so often, an igniter will often have an average lifespan of about five years. If it goes out, it will require prompt attention.

How Do I Know If I Need to Replace the Furnace Igniter?

Signs that the igniter is failing or has failed can include:

These indicators of a failing igniter could be caused by any of a few different things. In some cases, the igniter will malfunction because the combustible air cannot reach it. This can often happen if the air filter is dirty.

Other problem sources might be a faulty pilot burner, a damaged spark electrode or a faulty control module. Because the igniter is an electronic component, loose connections to the control module might contribute to impairment as well.

What’s most important is that you attend to a system issue as soon as you recognize that there might be one. Resolving it will be important to your comfort as well as your safety. You will also help prolong the performance and life of your furnace.

What Is the Cost to Replace the Furnace Igniter?

Replacing a furnace igniter is not complicated, and in some cases, if you have knowledge and experience, you can replace it yourself. However, the igniter is a brittle part that can easily break. If you don’t know how to properly handle and install the igniter, it’s best to have a heating professional do it for you.

Because many furnaces are built to last a long time, the original igniter you need should often be available. If it isn’t, your heating professional should be able to locate a suitable replacement part.

Your total cost will usually include the diagnosis of the repair, the part, and the labor for removing, replacing and testing the new igniter. With all of these factors, the cost to replace an igniter on a furnace in Aurora, Oswego, Plainfield, Naperville or Lisle will usually be between $200 and $300.

This is the range you might expect under normal circumstances, meaning the igniter is replaced during standard, scheduled business hours with typical labor and an available universal part. Note that certain factors could adjust the cost, including whether:

If you are a proactive homeowner who remains alert to the signs of possible trouble, you can often keep your costs within the regular range. These other factors are simply possibilities you should be aware of as an informed consumer.

Here for Answers and Service

You definitely want to have an igniter that functions correctly during winter in Naperville, Aurora, Plainfield Oswego and Lisle. If you have questions about your igniter or suspect something might be wrong with it, we are here to support you with solutions and answers. Just give us a call at (630) 585-6444!

We are also available to replace an igniter on a furnace in surrounding communities, including Montgomery, Yorkville, Plano, Batavia, North Aurora and Sugar Grove.